There’ll be times when you’re walking down the street and you’ll see two twenty-somethings with legs all the way to Lithuania, and that paradoxically world-weary manner of girls who have the world ahead of them. This being North London they are indeed from Lithuania. You shoot them an appreciative glance. A bit of envy maybe, but nothing deep. All you have to do is remember what they have ahead of them: adoration yes but also the insecurity of youth, the men you longed for and never understood when they hurt you, but mostly the constant jostling for your place in the world; that nagging feeling that you had to be at the centre of everything because if you weren’t you simply didn’t exist. Sure you looked great in a scrap of white broderie anglaise and bare legs but it was accessorised with insecurity and anxiety about what other people thought of you.  Because you were not even sure what you thought of you. “You don’t appreciate yourself,” said my mother. I now find myself saying that to my niece who is eighteen and gorgeous. She looks at me utterly perplexed as if to say “What is there to appreciate?” And I realise it’s hard for her, like it was for me: she has no idea who she is.  Youth may be a gift but it’s also one hell of a messy experiment if you do it right.

At some point, if you have examined and thought about life and its randomness, you will stop wishing you were six inches taller/had blonde hair/had larger breasts/had smaller breasts/had a perfect nose. It just doesn’t matter to you because you’re involved in life. And you become magnetic to people because they sense it.  You have hotter sex, spirited conversations and fun, the kind of fun you have when you really don’t give a damn. You don’t need to be the life and soul of the party; attention becomes something that matters more in private with close friends. You still look at and admire youthful beauty but you don’t spend time wishing you were that person: Charlotte Rampling once said that now when she sees a young, pretty girl attracting the eyes of every male around, she thinks, “that used to happen to me.” She said it not in a regretful way but simply as fact, as you imagine a woman of her demeanour might. It’s done. Now move on.

In terms of relationships it’s fascinating. I encounter men who find women their own age troublesome, challenging and Not Young.  This is an ancient setting for men, possibly it is literally set in stone and there’s no point fretting it.  Some do it because they can and it makes them feel good, others  because they fear their own mortality and that’s where I think women have an advantage with the ageing process: our bodies go through changes constantly and gradually.  We are adaptable creatures and we do just that so that by the time we’re forty-five we’re not fretting when that six pack no longer appears.  We know our breasts left level one a long time ago and for the most part, except for the days when we’re in the grip of our inferior, we just get on with it.

For men it can be a smooth run until their mid-30s when they are struck by the stark realization of a beer belly, love handles and then at some point during a routine visit, their doctor looks at their cholesterol readings and asks, “Do you want to see your kids grow up?” They overreact. They take up marathon running, a mistress or buy a Porsche. Or all of the above. It’s not such a shock for a woman to see stretch marks and a thicker waist. We adjust to those things and we evolve our style while investing time in our knowledge. I rarely wish for the past though I might smile at photographs of myself in lycra minis and think “Well I rocked that,” I don’t want to wear them. All the smart ladies I know focus on being their best in every possible way. They take the extraordinary amount of self-knowledge they have plus what they know about the world and they use it.  It’s the ultimate freedom to realise you have all these resources and also scary because you know it’s time to take the biggest shot at life you’ve ever taken. Your forties and fifties are in many ways the most radical period of your life I think.

So while ‘youth is beauty, anything else is not worth considering’ is the broad media/social agenda, I refuse to be infected by it because I’ve finally found me. I went through my twenties and thirties doing things because they were there, not consciously. I hid a lot of me, especially emotions. It’s taken me around 25 years to get to the point where I say to someone, “Actually this is how I feel. Take it or leave it.” Looking my best still matters but that doesn’t mean looking ‘young’. What matters now is being me and having these wonderful friends I have now, who are there for life and they know me.

This is the point I was meant to reach and if I wish for anything it’s that I’d reached this place of relative peace (also known as I don’t give a fuck) before. But it only comes with age and in my case it took me until my forties to even locate that place. I feel like I know what I am and what I want. I’ve also noticed that coincides with the world opening up in ways I never imagined.

The title of youngest/prettiest in the room is gone for good, but that’s always gone anyway. It can’t last.  But sexy, smart, sorted, funny, clever, these are the qualities that improve in the phase they quaintly call mid-life, but I just call my time. It’s all up for grabs. 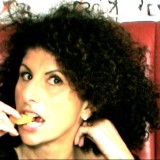 Model/Actress/DJ/Celebrity (Nah, just fibbing) I'm a writer but actually that's like saying a hairdresser is a person with scissors. I'm a strategist, ghostwriter,lifestyle journalist and advisor to executive types. Oh, and I've also worked for our very own Suzanne Noble on Frugl. Find me at lenasemaan.com
Show Comments Hide Comments

Leave a Reply to Will G Cancel reply